The market is in a short-term advance within a longer-term decline. The question is. Has the market bottomed and is this the beginning of a longer-term move higher or is the advance a bear trap?

The market is at an inflection point and a few of the indicators I will highlight here remind me of a coiled spring. Meaning stocks are poised to move decisively either up or down in the near term.

Below is a chart of the S&P 500 and while the recent move higher has advanced decisively above resistance, the trend is still down if you are looking at the big moves. In addition, the index is below its 200-day moving average and that average is trending down. Overall, a bearish chart.

Now, let’s narrow our focus on the recent advance off the June lows. Again, the advance did move decisively above resistance, and that resistance is now support. This is bullish price behavior.

Also bullish is the fact that you now have a structural uptrend which is defined by a series of higher-highs (HH) and higher-lows (HL).

Here is what to watch for in the coming weeks.

In summary, a move above resistance would be bullish and a drop below support bearish.

Below is a longer-term chart of the S&P 500 in the upper panel and RSI 14 (a momentum indicator) in the bottom panel.

Now, look at where RSI is currently. The recent move higher has taken RSI to 65.9. It is just under that dividing line (70). A move above 70 would signal a bullish market environment. Thus, based on this measure the market is at an inflection point.

One of two things could happen from here. (1)The market moves strongly higher and RSI advances above 70 signaling a new bull market. (2) This move higher is just a bear trap and RSI is suggesting that the market is now overbought within a bearish market environment. If this is the case, then I would expect a strong move lower in the coming weeks. Being overbought and sitting under resistance would be a perfect setup for a strong move lower.

Which scenario will play out?

One of my favorite market breadth indicators is the Summation Index which is in the upper panel and in the lower panel is a chart of the S&P 500 Index. Here are my takeaways from the chart.

I believe the Summation Index is displaying long-term weakness and short-term strength. This dynamic has the index coiled like a spring. How this compression resolves itself will offer valuable clues as to the overall strength or weakness of the stock market. 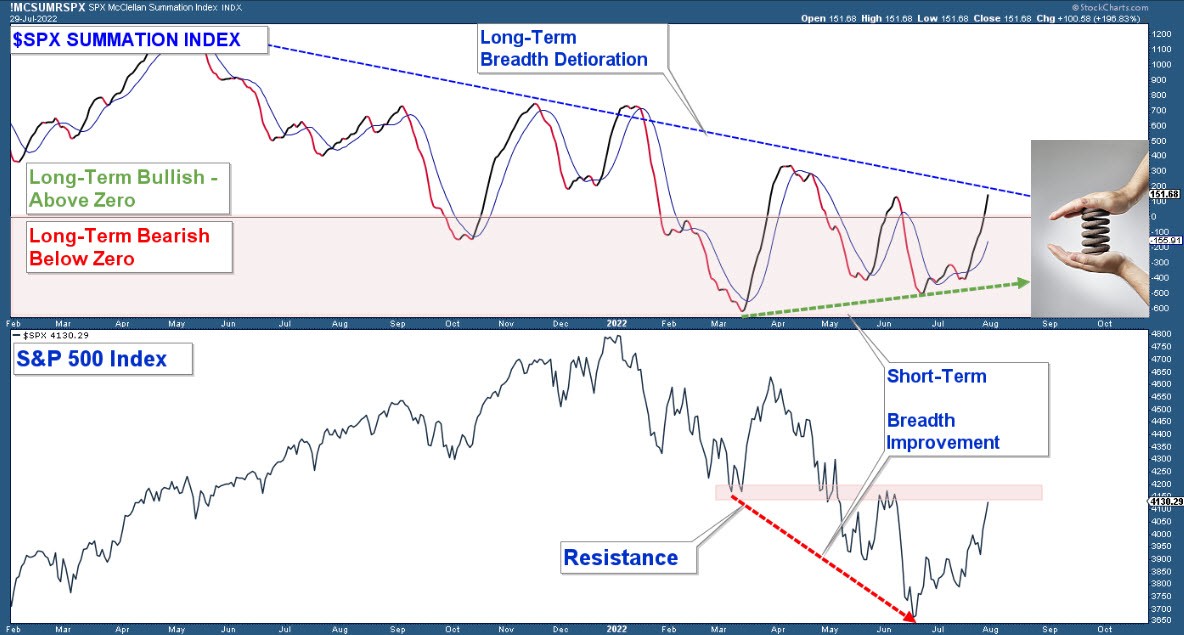 One characteristic of a major bear market decline is fear. This sentiment can be charted using the VIX which is in the lower panel. When the VIX is rising it indicates an increase in fear.

The VIX has been rising (red line) since November of last year which is what you would expect in a bear market correction. However, over the past four months, the VIX keeps topping out at 30 even though the S&P 500 has made a series of lower-lows. Like the Summation Index, the VIX is compressing like a coiled spring.

I see one of two things happening from here. (1) Either the VIX falls below the uptrending red line indicating a lack of fear as investors bid up equities. Or (2) the VIX bounces here like it has done previously and advances strongly above the 30 level confirming the market’s next big move to new lows.

One industry group that I will be watching closely is the Semi’s. Below is an hourly chart of the Semiconductor Index (SOXX) with TC 2000’s proprietary volume indicator, Time Segmented Volume (TSV), in the lower panel.

If Semi’s fall decisively here then the broader market is likely to fall, the VIX is going to rise and the Summation Index is likely to fall back below zero. All of this would signal that this recent advance was nothing more than a bear trap and that markets are likely to fall to new bear market lows.

The move in Semi’s over the next couple of weeks could be our early warning signal for the market’s next big move. 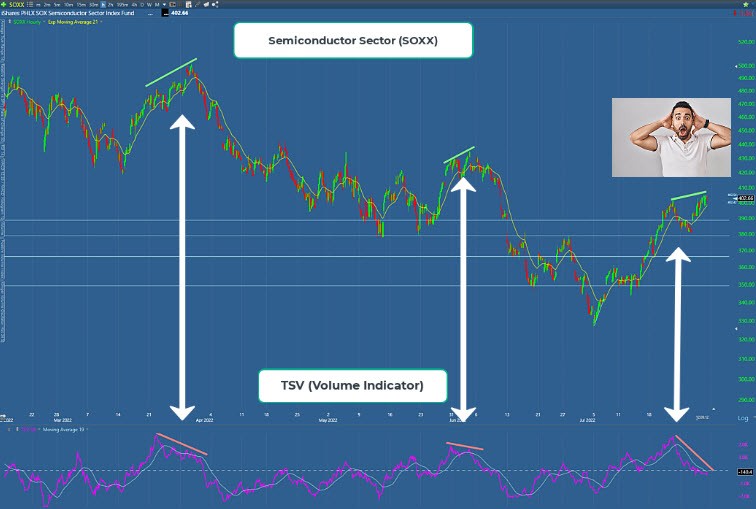 The stage is set. The battle between the bulls and bears has reached an inflection point. Can short-term strength garner enough force in the coming weeks to turn the tide?

Get your popcorn. Things could get interesting!

The stock portion of client portfolios is minimally invested in stronger market sectors and industry groups. These positions have been hedged with index short funds for most of this year. I have increased/decreased the degree to which we have shorted the market based on short-term market conditions.

The amount of risk we are taking in client accounts has been minimal all year given poor market technicals.

The further the market falls, the greater the future opportunity for those who can minimize losses during this bearish market environment.

CAN WE HELP YOU?

HERE’S AN EASY WAY TO FIND OUT:

We want clients who are a good mutual fit. To find out, we offer a no-pressure complimentary consultation. If we can help you and you want to work with us, that’s great. But if you don’t, we will give you free asset allocation direction on your retirement accounts, at no charge and with no strings attached.

If you are interested, send us an email to set up your complimentary zoom meeting. 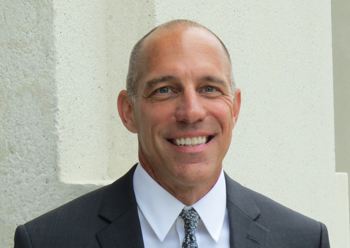 Asset Solutions Advisory Services, Inc. is a Fee-Only Registered Investment Advisor specializing in helping the needs of retirees, those nearing retirement, and other investors with similar investment goals.

We are an “active” money manager that looks to generate steady long-term returns, while protecting clients from large losses during major market corrections.

Asset Solutions may discuss and display, charts, graphs, formulas which are not intended to be used by themselves to determine which securities to buy or sell, or when to buy or sell them. Such charts and graphs offer limited information and should not be used on their own to make investment decisions. Most data and charts are provided by www.stockcharts.com.

Asset Solutions is a registered investment adviser. Information presented is for educational purposes only and does not intend to make an offer or solicitation for the sale or purchase of any specific securities, investments, or investment strategies. Investments involve risk and unless otherwise stated, are not guaranteed. Be sure to first consult with a qualified financial adviser and/or tax professional before implementing any strategy discussed herein. Past performance is not indicative of future performance.

You have Successfully Subscribed!

You have Successfully Subscribed!